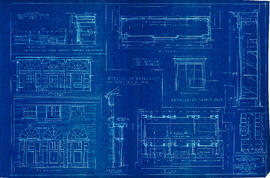 One of 32 technical drawings created for the Dupont School Building Addition, created by William Mallis on September 8, 1941. The addition was built in 1943 before the school was turned into the Laughbon High School, closed due to school boundary disputes. Finally, the structure was converted into a theater before being destroyed by fire in 1969.

William Mallis was born in Auchterarder, Scotland and received architectural training during a four year apprenticeship in Perth, Scotland. After working under John H. Felt, one of the most prolific school designers in Kansas, Mallis moved to Seattle in 1918 and worked as a structural draftsman for the Pacific Coast Company. From that point, Mallis worked independently as well as a partner with Joseph H.D. DeHart on a wide variety of public institutional buildings across Washington State.