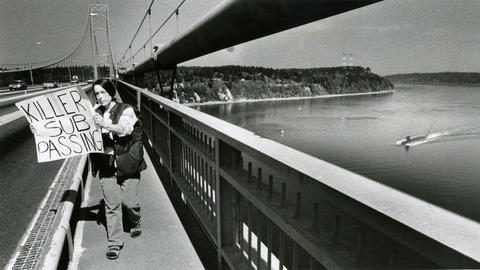 Back of Photo:
News
As a submarine approaches from the right, protestor Sallie Shawl lets her feeling be known to passersby on the Tacoma Narrows Bridge shortly before noon today. Shawl had been tipped off that the passing sub might prove to be a Trident class unit, which it apparently was not. None-the-less, Shawl noted that even Non-Trident subs have nuclear weapons capabilities so the protestor continues her display. When a Washington State Patrol officer stopped on the bridge to scoot Shawl away (saying she had been warned twice to leave the bridge) his car set in motion a three-car rear-ender that resulted in more than minor damage to a car driven by Greg Splett, 19, of Bremerton. Splett's car was the last in line to be involved in the accident. The middle vehicle, a small pick-up driven by John Lee, 43, of Gig Harbor also received damage. The lead car, driven by a woman I didn't get the name of, received apparently little or no damage. A classic object lesson in A CAUSE AND AN EFFECT.
Geff Hinds – Photo