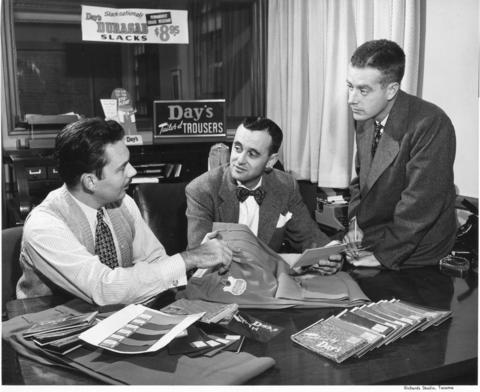 Frank E. Day (1874-1947) arrived in Tacoma from Fayette, Iowa in 1900. In 1903, he and Frank L. Shull filed articles of incorporation to form Shull-Day and Company. The company quickly became known for its "Big 5" work overalls. In 1906, the employees unionized with the United Garment Workers of America forming Local 201. The slogan "Western Made, Union Made" began being used to advertised the company's products. The company was operated out of 100-108 South 29th Street and employed 100 people by 1908. By 1928, the company had changed its named to Day's Tailor-D Clothing, Inc. Frank's sons, Hollis and Judd, took over the company following the death of their father in 1947. The company grew rapidly and began offering casual and dress slacks and sportswear. They became well known for the "College Cords" and "San Juan Slacks." By the 1950s, Day's reported 400 employees and a payroll of a million dollars. They were one of the largest employers of women in the region. They began an affiliate company in Canada called CanaDay's and operated manufacturing plants, distribution centers, and retail stores across the United States. In 1973, the company merged with Warnaco Inc.