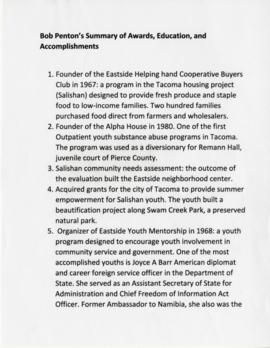 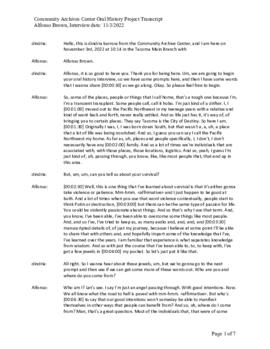 Oral histories and interviews conducted with community members by the Community Archives Center. 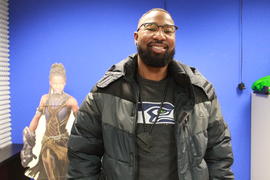 Oral history interview with Tacoma resident Isadore Wallace conducted by dindria barrow on February 17, 2022. In this interview, Wallace discusses his personal life lessons, his resistance to being oppressed or defined by trauma, and how he relates to his family located across many different states. Isadore asks us to think about becoming a better person and moving through life's changes, "Why would you go back to the dark when you have been to the light? Even if it has all of the things you need, you can't see them!" 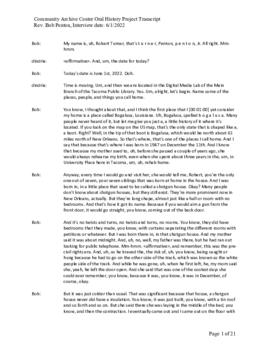 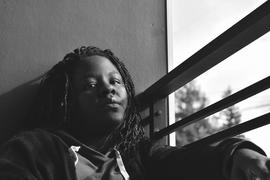 Oral history interview with Tacoma resident Jamika Scott conducted by dindria barrow on August 10, 2022. In this interview, Jamika shares the purpose of the Tacoma Action Collective, what it was like to run for Mayor, and life as an artist. Jamika shows vulnerability and strength in recounting her experience with an assault and the city's response to her case. Jamika inspires us to live in the now, embrace creativity and work on healing our wounds. 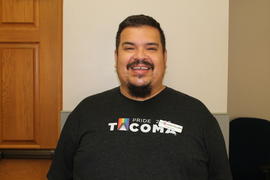 Oral history interview with Tacoma resident Lorenzo Cervantes conducted by dindria barrow on August 23, 2022. In this interview, Lorenzo talks about his passion for HIV Prevention as well as education overall. Lorenzo describes how education was the primary way that his life changed and that it was a gift given to him by his immigrant parents. He knew at a young age that he loved differently and was gay. He also knew about injustice at a young age because he was ignored for not speaking English or looking white. Lorenzo leaves us with this advice: “A child needs advocates when they go to school… Education is key for everything…a way of getting out of poverty…we need to support our youth to be able to have the schooling that they deserve to have. [and] About HIV right now, is that we don’t hear about it as much as we should; it’s still an epidemic…talk about it with your friends, talk about it with your family, and even with your mom.” Lorenzo is the Prevention Director of the Pierce County AIDS Foundation (PCAF). 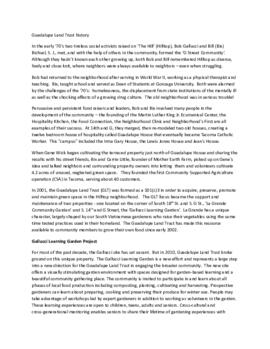 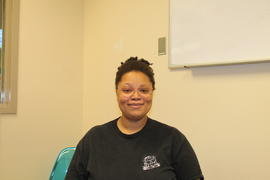 Oral history interview with Tacoma resident Candria Slamin conducted by dindria barrow on January 7, 2023. In this interview, Candria shares their story about coming to know themself over time. Even though Candria admits they have a long way to go in realizing where they will be in the future, they explain how identifying who they are is crucial to moving forward. “You can only be who you are, because of where you’re from.” In other words, you must know where you come from to figure out where you are going and who you truly are. Candria shares their work with the Rainbow Center and their work life thus far during the global pandemic. Candria also discusses how the past and the future can have dark parts along with bright parts—that life has an ebb and flow. “Not everyone’s race is at the same pace. I’m not running their race, I’m running mine.” 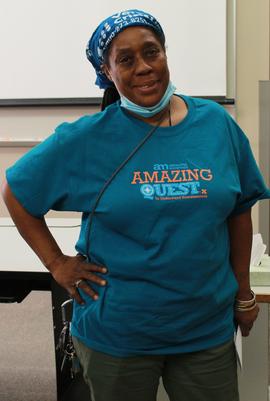 Oral history interview of Juanita Olivas, an unhoused neighbor living in Tacoma, conducted by dindria barrow on April 9, 2022. Juanita shares how she became homeless, how her faith has carried her through life, and why she does volunteer work. Juanita is 60 years young and plans on completing high school so that she can get a job as a medical insurance billing and coder. Juanita dreams of being “somebody that can help out with the community, always. I would love to have a really big apartment building that I could just take in all the homeless…just pour my heart out to ‘em, because people out there, you never know their story until you actually talk to them and I’ve met a lot of people that is so talented out there and so educated, but their story just breaks my heart.” 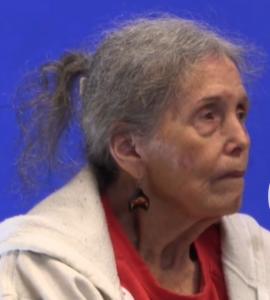 Oral history interview with former Puyallup Tribal Council Member, Ramona Bennett. Interviewed by dindria barrow on April 2, 2022, in the Digital Media Lab of the Tacoma Public Library. Ramona discusses her views on Indian and Indigenous rights, the people she encountered on her advocacy journey and how she continues living during difficult times. Ramona reminds us that “things shift slowly”, to “love whoever is left” after someone passes away, to put “just one foot after the other” and that her people live on because of “all the ways we pray are so hard”.

Oral history interview with Tacoma resident Cynthia Tucker conducted by dindria barrow on April 21, 2022. In this interview, Cynthia shares her life story from the beginning of her family to the present day. Cynthia reminds us to reflect on our past and the choices we have made to teach us about who we are. Cynthia remembers being a shy child who had strong female influences in her family that helped her find her own voice. Cynthia is the current president of the Tacoma City Association of Colored Women's Club. 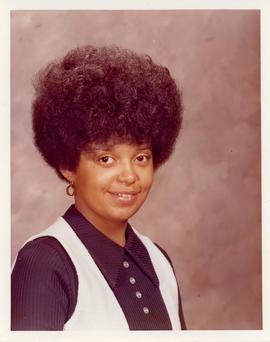 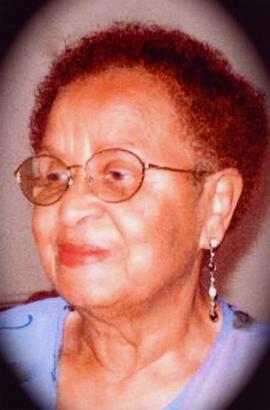 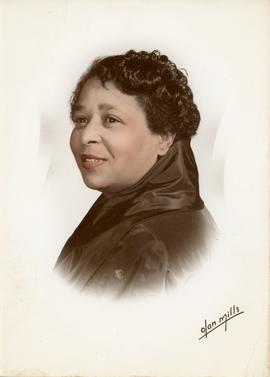 Cynthia Tucker's grandmother, born April 25, 1917. A July 19, 1936 article from the West Chester, PA Daily Local News newspaper stated, "Mrs. Tacie Steele was last night elected permanent chairman of the Citizens' Civic and Welfare Club, an auxiliary unit to the recently organized Citizen's Political Club of Chester County. Mrs. Steele is s committee woman." Cynthia was so proud to find this clipping amongst family artifacts given to her by her mother. "I always wondered why I was so eager and interested in community work. Now I know." Tacie Steel's mother was Mary Etta Draper Cooper Washington Dorin (9/5/1874-11/22/1971) and lived in Philadelphia, PA. 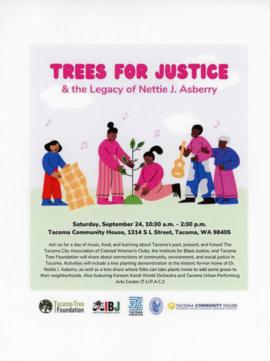 Flyer for the Trees for Justice event, featuring the Legacy of Nettie J. Asberry and the garden at her house. Sponsors of the event are listed as well as an agenda for the program.

Oral history interview with Tacoma resident Reverend Bob Penton conducted by dindria barrow on June 1, 2022. In this interview, Bob shares his story-lessons that give us insight into the way he moves through the world. Bob has us contemplate our purpose in life and how money does not make a person rich in character. Bob has performed many services and duties in our city as well as conducted protests against violence which had an impact on neighbors near and far. 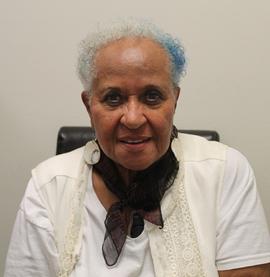 Oral history interview with Tacoma resident Bernice Morehead conducted by dindria barrow on August 16, 2022. In this interview, Bernice tells us that she was a born into a family of sharecroppers who descended from slaves forcibly brought to Mississippi. Bernice lived on a farm until she was 16 years of age who spoke the language of animals until she moved to Iowa and worked with her mother as a Domestic Engineer. Bernice describes how she enjoys a challenge such as running four marathons, learning to swim at 50 years of age, finishing a triathlon, driving from Iowa to Washington state with two children and a grandchild, then earning two college degrees. She has worked for the state, run her own business, been a substitute teacher, is a certified Life Coach and is now helping others at the Bethlehem Baptist Church Shelter. Bernice reminds us to dream of new challenges and to take pride in whatever you do. 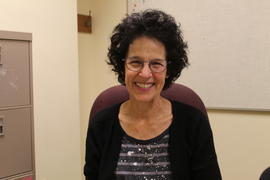 Oral history interview with Tacoma resident Deborah Ranniger conducted by dindria barrow on September 20, 2022. In this interview, Deborah tells us how the landscape of Tacoma with its evergreen color and specifically the sight of Mount Rainier made her decide to live here at 10 years old. Deborah tells her family’s story of fleeing from Eastern and Western Europe to escape persecution. Deborah shares her journey from Seattle and Kent to Tacoma based on the burgeoning art scene. Deborah has recently published a memoir about her father and his influence on her life called, “Against the Current: A Conscientious Objector During World War II and the Daughter He Inspired.” 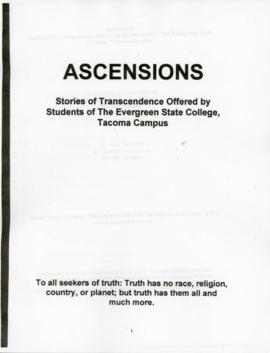 Collected in "Ascensions: Stories of Transcendence Offered by Students of The Evergreen State College Tacoma Campus", Cynthia Tacye Tucker writes about her life.