Overhead shot of the Boitono-Ennis wedding showing bride and groom interacting with attendees on a street with bridesmaids.

Bride and child at Yoshioka-Mizutani wedding holding floral arrangements. Display of bananas, apples and oranges can be seen in background.

Yasuda-Miyamoto wedding photo of bride and groom cutting the cake with floral arrangements, fruit bowl and 7-Up bottle in the background. 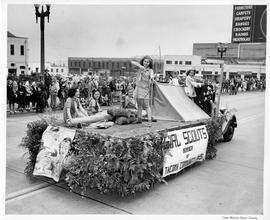 Girl Scouts of America float in an unidentified parade. Girl poses with bow and arrow on a truck bed decorated as a camp site with tent and logs. Building appears to be downtown due to a parking garage but no address numbers are identifiable . 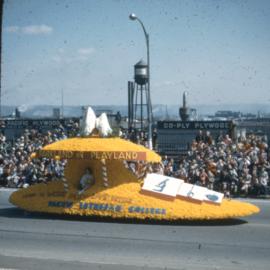 Pacific Lutheran Church's Parkland of Playland float in the 1956 Daffodil Parade on Pacific Avenue with North Pacific Plywood Inc. building and water tower in the background. A person rides under a candy cane canopy over the slogan, "Learn to Work, Play, Live Better." 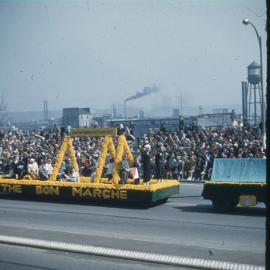 Float for The Bon Marche with participants in a variety of different themes costumes 1954 Daffodil Parade. The sign at the top of the float reads, "United Good Neighbors Build Tacoma Youth." 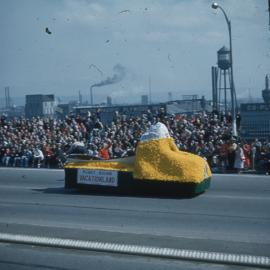 A very simple float for Nora's Bridal shop at the 1954 annual Daffodil Parade. 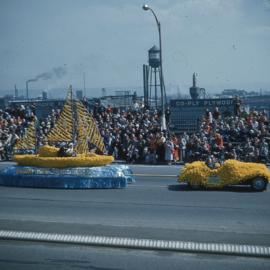 Float for the Tacoma Retail Trade Bureau with two children in a boat with sails made out of strings of flowers being pulled by a small vehicle at the 1954 Daffodil Parade. 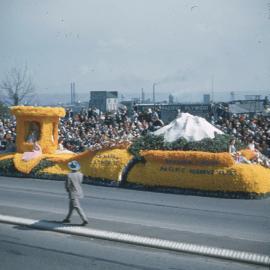 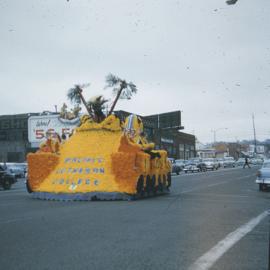 Float for Pacific Lutheran College with participants waving and smiling below a representation of palm trees at the 1954 Daffodil Parade. 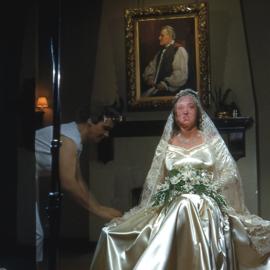 Double exposure photo of Scott-Brown wedding with bride being attended to. 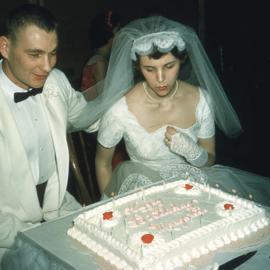 Pierce-Bowers wedding photo with bride blowing out candles on a birthday cake. 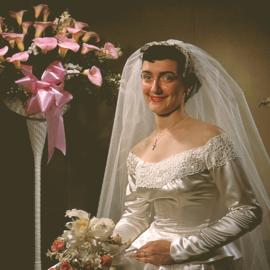 Falaschi-Mohler wedding photo of the bride. 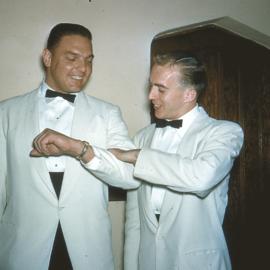 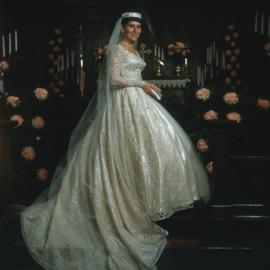 Unknown bride posing at the altar.

Pre-wedding photos of Mr. and Mrs. Walt Coy with Mr. Cole putting a painted tie in his mouth.

Drielbirs-Lows wedding photo of the bride holding a piece of glassware while the crowd smiles looking on.