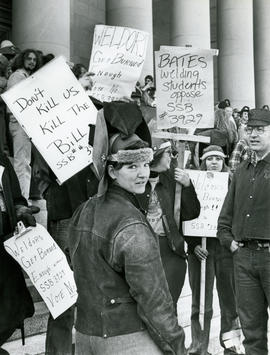 Back of Photo:
Protest 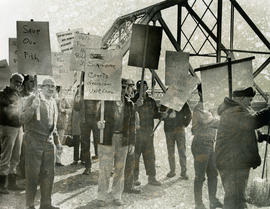 Back of Photo:
Demonstrators
Photo by Bob Rudsit

Demonstrators gather in front of a bridge with signs reading, "Save our fish" and "Supreme Courts decision unclear." 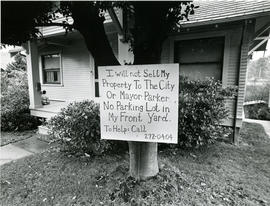 Back of Photo:
Erick Johnson's home was moved to the South End.
Sign:
I will not Sell My Property To The City Or Mayor Parker.
No Parking Lot in My Front Yard. 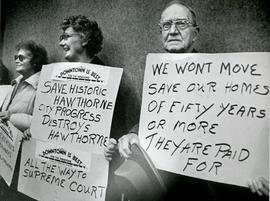 “Hawthorne residents protested giving up their homes for the dome.” During a public hearing, the public was divided on where to build the dome. The city council heard people arguing about placing the dome downtown or in the Hawthorne Neighborhood. Photo by staff member Bob Rudsit.

Back of Photo:
Erick Johnson

Three people hold signs reading, "Save Historic Hawthorne" and "We won't move our homes of fifty years or more. They are paid for." 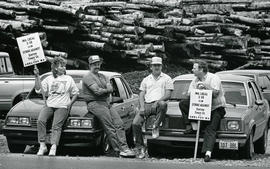 Back of Photo:
International Woodworkers of America local 3-38 formed an informational picket line at the Simpson owned Commencement Bay Mill Company at 11th and Portland Avenue in Tacoma on Tuesday morning. They claim that so many workers honored the picket that the mill did not operate Tuesday. Local 3-38 workers are on strike against Simpson in Shelton.
Three of the people in photo are IWA 3-38 members from Shelton; the person who is second from the left is a union carpenter who stopped by to give moral support. His name is Roger Dudley...
From left: Patsy Glaser, Roger Dudley, Bill Gibson, and Doug Norton.
Bruce Kellman 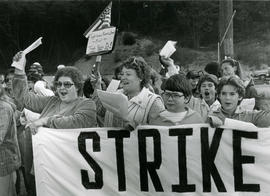 A group of demonstrators hold a banner reading, "STRIKE." A sign in the background reads, "Tough times never last but tough people do." 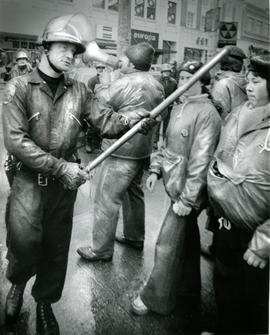 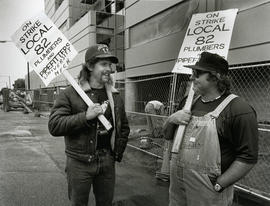 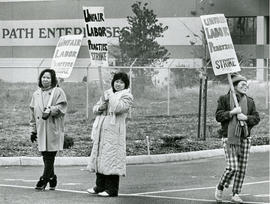 Sin Ja Jo, Yang Sun Yon, and Tok Sun Young hold signs reading, "Unfair labor practice- strike." They participate in a walk-out turned lockout, protesting Path Enterprises on 7717 Portland Ave. The workers had voted in August to form a union, but contract negotiators for the union and the company had not yet reached an agreement.

A striking worker sits in the back of a pick up truck parked in front of the G.W. Paulson flooring business storefront. A mannequin wearing a hardhat holds a sign reading, "On strike against G.W. Paulson." 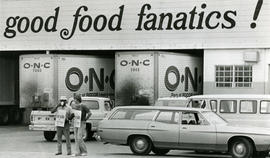 Teamster union members walked off the production lines at Nalley’s Fine Foods and set up picket lines while in a contract dispute with the Tacoma processing firm. Photo member by staff Russ Carmack. 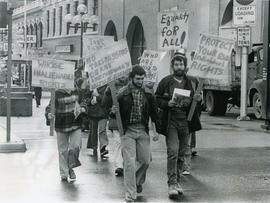 A group of demonstrators hold signs reading, "Equality for all!" "Whose inalienable rights," and "No trespassing on any individual's human rights." 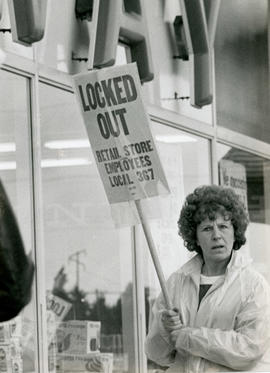 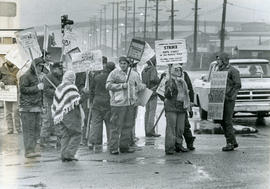 About 30 farmers halted the Port of Tacoma’s import meat operations while protesting the importation of low-cost meat. The farmers were mainly from Eastern Washington and said they were a part of the American Agriculture organization. Photo by staff member Bob Rudsit 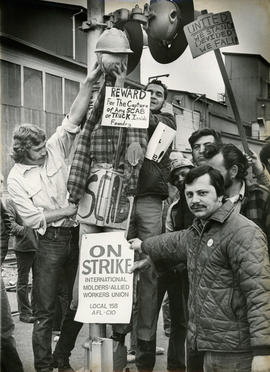 Striking foundrymen gathered at the Atlas Foundry and Machine Co. to picket as their negotiators met in Portland, trying to reach an agreement with a group of foundries located in Oregon, Washington, and California. “The strikers are members of Washington State Local 158 of the Molders and Allied Workers union.” They have been on strike for six weeks.

Striking workers hold up an effigy wearing a hardhat and holding a signs reading, "SCAB" and "Reward for the capture of any SCAB or truck inside foundry." Other signs read, "United we stand, divided we fall," and "On Strike/International Molders Allied Workers Union/Local 158 AFL CIO." 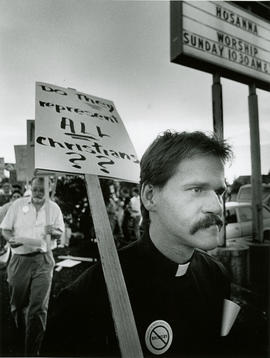 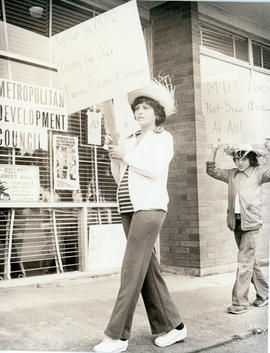 Two demonstrators march outside of the Metropolitan Development Council office. One holds a sign reading, "What is MDC doing for Puerto Rican Community?" Another sign says, "MDC does not serve us (Puerto Ricans) at all!" 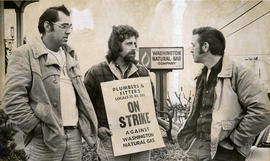 Back of Photo:
Photograph by Bob Rudsit

Striking gasfitters and electrical workers stall in talks with employers. The strike had been in progress for 69 days. About 340 union members from parts of King, Pierce, Snohomish, Thurston, and Lewis counties have been affected, with an additional 260 members of other unions striking in support. Photo by staff member Bob Rudsit. 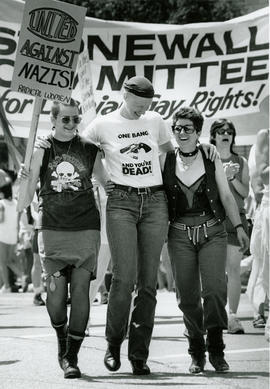