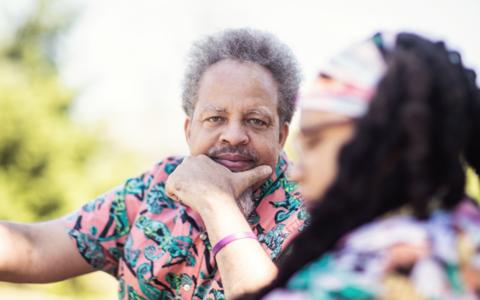 Paul Jackson was born in Philadelphia, Pennsylvania on February 20, 1968. His mother, Vickie Cunningham-Jackson-Davis was born in Choopee, South Carolina. She was a twin and the oldest of ten children. She graduated from South Carolina State University and served as a civilian in the Army. His father fought in the Vietnam War. As a child, Jackson moved to Willingboro, New Jersey, a suburb 15 miles northeast of Philadelphia. The family purchased a home in the Levitt and Sons residential development, which had been successfully sued in the late 1950s for refusing to sell to Black families. While in grade school, Jackson lived in Fairfax, Virginia, Harrisburg, Pennsylvania, and Cambridge, Massachusetts. In Cambridge, his mother attended MIT. It was there that Jackson saw his first computer when he was in the 6th grade. He played violin in the Cambridge Youth Orchestra and began playing guitar.

He attended Prairie View A&M University in Texas where he played bass in an award winning funk band. He received a National Science Foundation scholarship to obtain his PhD in computer engineering. His research focused on augmented and virtual reality within the aerospace industry. He completed three summer internships with Boeing and, after graduation, was hired full time and relocated to Seattle.

He has presented nationally and internationally on a range of topics including deep space exploration and digital media authoring. Jackson is the co-chair of the Swedish MS support group. He is a Chronic Disease Self-Care Manager and is certified in Adult Mental Health First Aid through the African American Reach and Teach Health Ministries. He and his wife, artist and educator Jasmine Brown, now reside in Tacoma.