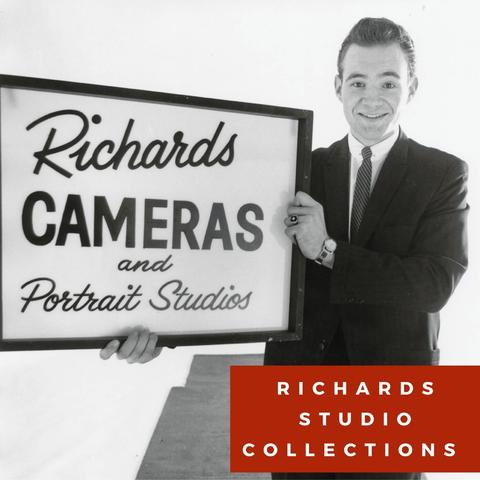 The studio was first operated out of the Chamber of Commerce Building (2) where it provided both photograph and moving image services such as the recording of public performances and events for distribution with companies specializing in newsreels (3). One of these events filmed was a local parade staged for the opening of the 1920 film “Last of the Mohicans” that played before the film at the Victory Theater in Tacoma in 1921 (4).

In 1935 the studio moved its location into the Tacoma Hotel the same year the hotel caught fire (2). According to the Tacoma News Tribune, two policemen had to keep Turner Richards from entering his shop to save his expensive equipment. "He made several runs for the smoke-filled doorway but was stopped each time by the two policemen" (5). In the late 1930s, Turner Richards traveled to Hollywood to work as a photographer for Warner Brothers Studio (6). Richards also developed Technicolor and animated films later used in Walt Disney productions (1).

In the 1940s Richards expanded and opened Nancy’s Baby Portrait Studio located at 736 Pacific Ave in Tacoma (7). By this time Turner’s sons, Bob and Nelson, became the photographers at their main studio located at 734 Pacific Ave (8). Richards Studio expanded again in 1963 and opened another portrait studio at Villa Plaza, in Lakewood (9). On Sunday, February 18th, 1968 the Richards’ housekeeper found Turner Richards in his front yard and he is rushed to the hospital where he died. His death was caused by apparent suicide (10). The Studio was then run by Edmond Paul Richards (1905-1984) and continued to operate until 1980 when it closed (11) (12).