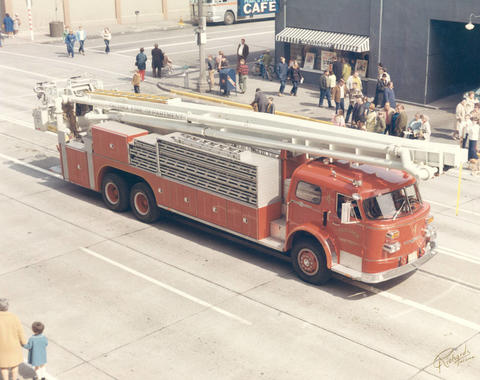 The first local firefighting company, the "New Tacoma Hook and Ladder Co. No. 1," was established on May 29, 1880. The company was made up of volunteers using donated equipment. When New Tacoma and Old Tacoma merged to form the City of Tacoma in 1884, the two volunteer fire departments were also combined. Lack of equipment and an inadequate water system led to significant fire destruction in the early years of the department. The City Council considered multiple plans to respond to the problem, even a proposal that all households stores 40 gallons of water on their roofs to assist with a fire response if needed. Beginning in April 1885, a new water system, the installation of 40 fire hydrants, and funding for equipment allowed the department to improve their response and reduce fire destruction.

After the Great Seattle Fire of 1889, the Tacoma City Council was determined to invest in its fire department to prevent similar destruction. Tacoma became one of the earliest cities in Washington to convert the volunteer positions to paid jobs. An alarm system was also installed that year which connected 28 alarm boxes with the alarm tower on I Street. In 1899, the tugboat "Fearless," owned by the Tacoma Tug and Barge Company, was outfitted with a pump and hoses to be made available to the department when needed.

By 1900, the department had a fleet of 33 horses. Seven years later the first motorized vehicle had been obtained. The complete transition from horses and steam fire engines to motorized vehicles was complete by 1919. The Tacoma fire fighters organized as the City Fireman's Federal Union No. 15601 and were charted by the AFL in 1917. The following year, they became a charter member of the International Association of Fire Fighters as local number 31. A bond issue passed by Tacoma voters in 1928 led to increased funding and the purchase of the department's first fireboat.