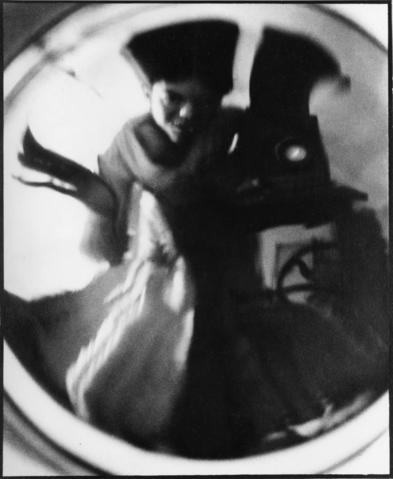 Virna Haffer (then Virna Hanson) was born in 1899 in Aurora, Illinois. In 1907, her family moved to Washington to join the Home Colony, an anarchist community located near Tacoma. At age fourteen, Haffer moved to Tacoma where she lived with a local family and enrolled as a student at Stadium High School. She soon began working at the studio of Harriette H. Ihrig, located at 1107 South E Street. After a brief marriage to fellow Home Colony resident Clarence Schultz in 1919, she married Paul Haffer who would appear in many of her photographs. Paul, a labor activist and organizer, wrote for a number of local workers' publications and spent four months in prison for libel over criticisms he made of George Washington in a letter published in The News Tribune in 1916. Their son, Jean Paul, also became a frequent photographic subject after his birth in 1923. In the 1920s, she participated in a number of exhibitions in Seattle and was involved in both the Seattle Camera Club and Tacoma Camera Club. During this period, Haffer opened her portrait studio which she would continue to operate for fifty years. In 1930, she gained national attention with her work included in the Seattle Camera Club Final International Exhibition and reproduced in The American Annual of Photography. That same year, her first local solo exhibition was held in the lobby of the Wintrhop Hotel where she displayed both photographs and block prints. Over her career, Haffer experimented with drawing, painting, sculpture, fabric design, and music. In 1931, she married Norman Randall who would also become a subject of her work. Many other local artists and friends also appeared in her photographs. In the 1930s, she collaborated with poet Elizabeth Sale on a book project, Abundant Wild Oats, that would combine Sale's poetry with Haffer's artwork. The work was never published. In the 1960s, Haffer began experimenting with photograms and became an authority on the medium. Her book, Making Photograms: The Creative Process of Painting with Light, was published in 1969. One of her photograms, "California Horizon," was included in New York's Metropolitan Museum of Art's traveling exhibitions and was later purchased by MOMA for their permanent collection. She was awarded the highest honor from the Professional Photographers of America and featured in exhibitions across the country. She died on April 5, 1974.