Firemen going into Acme Cleaners dragging firehose. A crowd stands outside the Kit Kat Tavern, with Heidelberg and Hamm's neon signage hanging in the window. 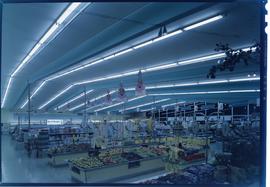 Interior of El Rancho Grocery Store, whose mascot appears to be an Aladdin inspired character wearing a turban on a flying carpet. The Store's slogan is "There is Magic in Savings." There is Van De Kamp's bakery display and a store directory in the back.

Diverse group of school children outside of the China Clipper Novelty Shop. Many of the children are holding up stockings that are filled with apples and oranges.