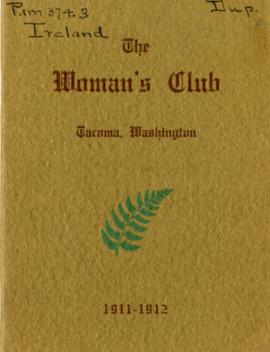 Yearbook for The Woman's Club on the theme of "Ireland."

The Woman's Club was launched on October 27th, 1904 in the home of Mrs. J.Q. Mason and led by president Reverend Abbie E. Danforth. Danforth, appointed in 1889, was one of the first female reverends in North America. Danforth had been a pastor at the Park Universalist Church since 1902 after moving west from the Unitarian Church of Kent, OH.

Among the club's contributions to Tacoma were the creation of a female owned and operated "rest room," designed to be a "place offering almost retirement of home during unemployment hours" which would "prove a boon to hundreds of women and girls in Tacoma." The "rest room" appears to have been organized by Danforth in order to do for "women what the Y.M.C.A. is doing for men." This association with temperance groups continued in August 1913 when Danforth was elected president of the Women's Christian Temperance Union. The "rest room" was located in the Chamber of Commerce building on December 3, 1904 and led directly to The Woman's Club Hotel, which would open a year later. This institution, also open only to female patrons, was located nearby at 714 Pacific Avenue.

The Woman's Club also opened a physical clubhouse on 426 Broadway St. in 1915, intended to create a physical meeting space for all of the federated study clubs in the city, which remained extant until 1960. That said, Mrs. Abbie E. Danforth is still recorded hosting the final meeting of the Woman's Study Club in May 1965 from her home at 1322 N. Yakima St. The motto of The Woman's Club was "there is no higher duty than to work for the good of the whole world."