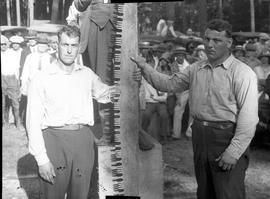 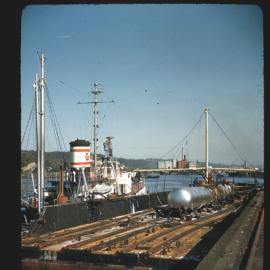 Worker smiles in front of large planning machine inside. In the distance, a man in a bowler hat and vest looks outside.

Two men in suits and hats observe a laborer move lumber along a series of rollers outside. 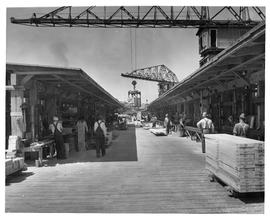 Laborers watch on partially covered boardwalk as cranes drop a pallet of lumber. A "No Smoking" and conveyer belt can be seen at the work stations. 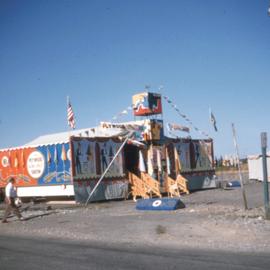 Exterior shot of the Doug Fir Plywood Association Circus. A banner outside displays the words "Plywood Jubilee" and "Free Show." A mural along the from of the structure depicts a magician turning a tree into plywood.

Person on an Allen Logging Co. number three vehicle writing something in a book. The vehicle appears to be parked at a small station with a somewhat elevated platform next to a shed.

Attic space with a large saw. A man in a hat can be seen crouching on the right hand side. 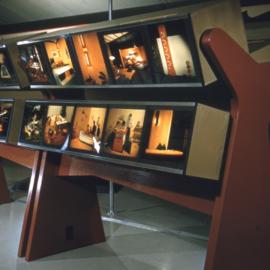 Display kiosk at the Doug Fir Plywood Association Circus with 233 small wooden disks labeled with ways the company creates sales. Black and white photographs of the plywood making process are visible in the background. 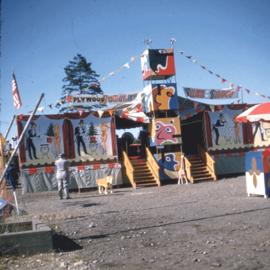 Exterior shot of the Doug Fir Plywood Association Circus. A banner outside displays the words "Plywood Jubilee" and "Free Show." Flood lighting can be seen at the top and bottom of the structure. 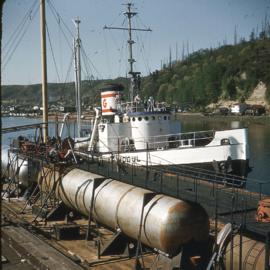 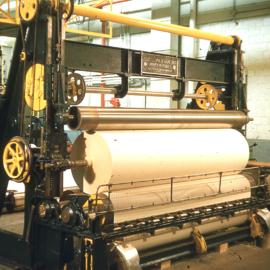 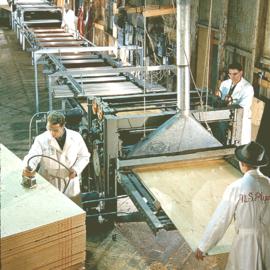 Laborers at the U.S. Plywood Co. in Seattle.

Worker testing lumber with a series of drillings. Various chalk markings can be identified in the wood as well as notes with lined data.

Laborers shaping and planning lumber outdoors with both electric and nonelectric tools.

Side view of the Henry Mill & Timber Co. building with smoke pluming in the background. A more rustic wooden structure, crane and frame under construction are in the foreground. 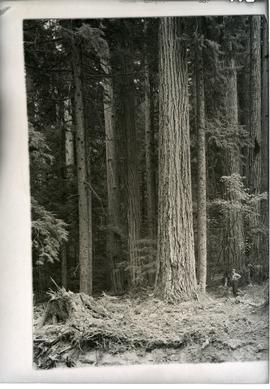 Man in a hardhat looking up at an old growth tree.